Back in the early 90s, the term “chaos theory” was often bandied about as THE FUTURE. It was never clear exactly what chaos theory would be THE FUTURE of, but it was clearly important stuff. Fast forward 20 years, and I’m finding all sorts of areas where chaos theory is relevant to musical audio.

One of the big concepts in chaos theory is self-similarity. This term is used to describe objects or processes that appear to be similar at different time scales. Self similarity can be found in the cragginess of a coastline, where zooming in at ever smaller resolutions results in similar craggy patterns. A classic visual representation of self-similarity from the early days of chaos theory was a simulated fern, where each leaf was the same pattern as the entire fern: 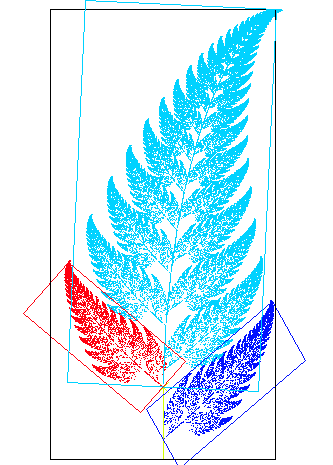 Feedback through a pitch shifter can be viewed as a DSP process that creates self-similarity. Each time the signal passes through the pitch shifter, a copy of the original signal is created, but at a different “size” (i.e. pitch) and different scale (i.e. the volume). If the pitch shifter used has a long enough window for its grains, each grain can end up containing copies of the original temporal detail of the input signal, scaled in both time and amplitude. Shifting a signal up by an octave, and feeding this back into the input of the shifter, will result in a signal that is self-similar at different frequency/wavelength scales.

For many natural processes, the details end up getting blurred at the smallest resolutions, due to the nature of the physical materials at these resolutions. This blurring is reminiscent of the “blurred self similarity” generated by the classic shimmer effect, where the signal is self-similar at different frequency scales, but the temporal details are lost.

Many natural processes can be viewed as self-similar random processes, where the scale of the randomness follows a 1/fn distribution. In other words, there is randomness happening at all frequencies/time scales, but the amplitude of that randomness falls off as a factor of frequency.

Self-similar randomness can be heard in glorious detail inside of a tape echo.

A highly damaged tape loop creates randomized pitch modulation at different time scales, that is far more complex than your typical sine LFO, or the “randi” modulator found in the Music N computer music languages. Mix this pitch modulation in with the dry input signal, and the result is a natural doubling sound. Turn up the echo time and feedback, and the result is a huge ambient sound, where the complex pitch variation produces a rich, organic wash.

A cool sounding bug from the next plugin